Failure and success – Why we should fail and fail fast

Success is important and in order to succeed you need to not fail… right?

We are raised from a young age to be the best, which is often associated with the absence of failure. The word “failure” itself is synonymous with disappointment, disaster and tragedy. There’s nothing positive about any of those associations. Yet we all fail one way or another and some failures have resulted in some of the greatest successes.

Think about examples such as the creation of the pacemaker and people like Steve Jobs and Bill Gates. The pacemaker’s revolutionary size reduction from the size of a television to a 2 cubic inch implantable pacemaker, was resulted in by a failure by Wilson Greatbatch while working on a heart rhythm circuit. Steve Jobs was fired from his first job and Bill Gates was a Harvard dropout with a failed company (Traf-O-Data). What if Greatbatch, Jobs and Gates got caught up in the opinion that failure is just a tragedy to be avoided? My opinion is that we wouldn’t know their names if they didn’t see failure as an opportunity to grow and do something innovative and successful. 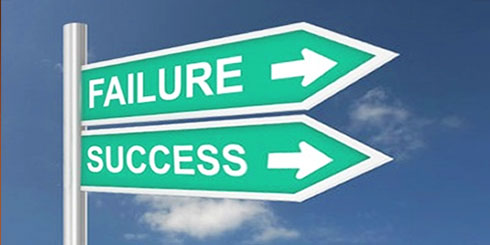 Only those who dare to fail greatly can ever achieve greatly” – Robert F. Kennedy

Some form of failure is inevitable, it is part of the process, and it’s time we start celebrating failure’s ability to grow us.  Instead of being overcome by disappointment, we should pursue failure’s overwhelming ability to teach us new lessons, grow and build us and open our eyes to unexpected outcomes. The sooner we accept this, the quicker we succeed.

“Success is not final, failure is not fatal, it is the courage to continue that counts” – Winston Churchill

Ultimately, we want to get somewhere, so stopping at accepting and celebrating our failure is not the end. Once we have accepted our failure and learnt our lesson, we need to pick ourselves up and implement these learnings. By addressing our findings, we are able to amend our solution/ approach, which results in a more suitable, valuable and innovative outcome. This is quite possibly the supreme definition of success. This feedback loop of failure inputting into our process needs to become an iterative process of learning and innovating if we want to succeed.

Failure helps us succeed but understanding that we live in an ever-changed world that is ever-pressing for faster delivery, we know that we don’t have time to stay in a state of failure. The faster we move through the iterative process of acknowledging the failures and building them into the solution, the faster the movement toward success. Let’s not wait for another solution to be perfect, only to find out when going live that it is either redundant, not suitable or already delivered by a competitor. We need to fail fast and learn quickly if we want to succeed. Once again, we see the powerful relationship between failure and success.

Let’s put this into action

From now we need to start setting an example for the next generation that failure is inevitable yet imperative in our pursuit of success. We can do this by adjusting the way we approach any of life or work’s problems. Instead of working and waiting until the solution is at a perceived level of perfection before going live, rather we need to adopt an agile approach and get our “good enough” solution out. By getting our “good enough” solution out, we quickly learn lessons from any failures that this may result in and build those findings into our next iteration. This enables a more suitable and value-adding solution with every iteration. This is the approach which removes the negative stigma around failure and rather positions it as the opportunity to learn and grow in order to deliver a successful solution! So be brave and believe in the importance of failure in pursuing success.

True disruption is less about technology and more about people

There can be no doubt that over the past decade, technology and digital innovation has had a transformative impact across sectors and industries. Corporate juggernauts such as Kodak have been toppled, whilst small and nimble innovators have changed the face of entire sectors. The local financial services sphere is currently undergoing its own moment of...
Read More ...
Menu
Envelope Facebook-f Twitter Linkedin-in
Sign up for Mindbullets