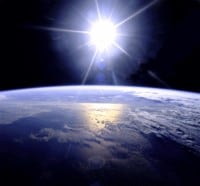 Today is the first day of the ten-month year

Things are finally beginning to settle down again after the great asteroid impact of 2029. The earth has been thrown into a slightly lower orbit around the sun, and days are slightly longer, which means it only takes 360 days to complete a full circuit.

After heated debate between the survivors of the instant climate change caused by the impact, primarily business activists, orbit-denialists and scientific marginalists, the World Council has finally decided to convert to a more practical calendar.

From now on there will be ten months in a year, named after their numbers. Each month has 36 days, divided into six weeks of six days each – five working days and Saturday, which is a holiday for most traditional workers. Sunday has been made redundant.

This innovation has been hailed by business leaders in China as “a great step forward in creating a universal calendar.” As the leading economy, China’s opinion takes precedence in all commercial matters, and the rest of the world has to comply.

NASA has issued a free flexiPad app that recalculates all future dates based on the new orbital calendar. Some activists are calling this the “New Y2K” and predicting global system crashes if implemented.

Historical dates remain unchanged to avoid temporal dissonance. Astrologers are in a tizz as they’ve lost two Zodiac signs, and are struggling to deal with birthdays and anniversaries like 34-Nine 2031.

The scientists are still complaining, as the new orbit ‘gains’ one-tenth of a day every year. The World Council says this is easily corrected by adding an extra Saturday to Three every ten years. So 37-Three 2041 will be the next Leap Year.

‘Fourth of July’ will be celebrated on 6-Six, which is always a Saturday. Likewise Xmax on 30-Ten and NuYear on 36-Ten. The first day of the year is always a Monday, a good day to make a start.

This scenario may sound facetious but is totally plausible. Severe earthquakes can affect the earth’s spin and so the length of a day, if measured with sufficient accuracy.
It is inevitable that, eventually, a sizeable asteroid or meteor will strike the earth. Assuming that we are unable to deflect it, and that we survive the inhospitable environment it creates, then the angle, force and direction of the impact could make a significant adjustment to the length of a year.
Rather than adjusting the calendar each year, it is an opportunity to usher in a new age of time and dates, to ensure the seasons still coincide with our conventions and plans. The most obvious idiosyncrasies of the Gregorian calendar lie with the fact that there are 12 months of varying length. Ten months of equal length would be far easier to manage, and having each week and month always beginning on a Monday is just plainly sensible. Besides religious objections, there is no need for a Sunday.
Of course, there would never be a ‘Friday the Thirteenth’ again!

FROM MALLS TO MARKETS IN A DECADE

Today is the tenth anniversary of the opening of ‘Westfield London’, then the biggest urban shopping mall in Britain. This...
Read more

Sony used to dominate the personal music space with the Walkman. The arrival of the iPod changed all that. It...
Read more

It’s become apparent to everyone that the stock market these days is just a giant online casino. As one commentator...
Read more
View more insights