AIDROID, YOU READ MY MIND 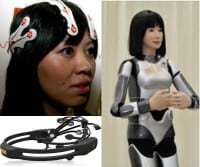 Sony's new personal robot has one distinct advantage - it literally knows what you are thinking, all the time!

It’s the latest thing in personal service and home care in Japan. Especially for the growing senior class of citizens, who are increasingly relying on their mechanical helpers rather than family members, who are too busy working to care for elders.

Now Sony has released a robot with intelligence and intuition. By constantly analyzing signals from your Emotiv 6S headset, AiDroid knows exactly what you are thinking, and can anticipate your every move.

Which is wonderful for anyone with a handicap, or speech problems; and anyone else who wants a ‘companion’ that is in tune with your thoughts.

The big breakthrough came ten years ago, when Emotiv Systems demonstrated that you could train a computer, or any programmable device, using only your thoughts. Their non-invasive headset was a new standard in ‘brain-computer’ interfaces, and has since been used to control everything from 3D games to electric wheelchairs, email and Facebook updates.

Sony is taking it a step further. Their lifelike home care robot can now respond to your brain waves, and can be trained to be user-friendly, just by thinking. Teaching your AiDroid to read your mind is amazingly easy!

You just visualize the robot walking toward you, for five seconds, then mentally instruct it to do so. After a few practice routines, AiDroid knows just what you want. And because your mechanical friend can also ‘hear’ you, spoken commands reinforce the learning process.

No wonder owners treat these robots like real people. But it’s a bit creepy when the butler arrives with your drink, before you’ve even asked for it!

From H+ Magazine:
On April 22nd 2010, the U.S. press was fussing over the Tea Party, illegal aliens and Earth Day. But in Japan, a short cryptic statement in the Nikkei, Japan’s largest business newspaper, made a startling announcement about a somewhat different vision of the future — a goal to make available commercial mind-reading devices and personal assistant bots within the next 10 years.

It’s not surprising that the Japanese government and private sector would collaborate on a new initiative to develop bots with AI (artificial intelligence) capable of detecting when you’re hungry, cold, or in need of assistance, and electronics that can be controlled by thought alone. BMI (Brain-Machine Interface) technology typically involves an EEG sensor connected to a computer that can be controlled purely by thought (or, more accurately, brainwaves).

While the U.S. Army actively pursues “thought helmets” that might someday lead to secure mind-to-mind communication between soldiers, the Japanese are going after the consumer market. Their aim is to produce BMI technology to change TV channels or to use mobile phones to send text messages composed by thought alone.

Several years ago, Hitachi, a major Japanese TV manufacturer, announced the goal of a commercial BMI by 2011 — and they are actively pursuing thought-controlled TV. If you’ve experienced the new immersive 3D TV technology, it’s not hard to imagine a near out-of-body-experience with a thought-controlled game controller as you navigate through 3D virtual space and visit your Second Life and World of Warcraft friends at remote locations.

Let’s say you need a couple of shiny, glittery baubles for your festival tree, or maybe something to fix the...
Read more

VOTERS BACK WAR FOR BRAINS

His Holiness The Dalai Lama once remarked: “It is most remarkable that India, since independence in 1947, has maintained the...
Read more

If you're anonymous you're a terrorist

“We, the free peoples of the world, have crippled the hegemon’s ability to exact punitive interest penalties from their lenders...
Read more
View more insights