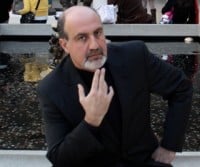 Nassim Taleb’s ground-breaking book was published exactly ten years ago today and we celebrate its anniversary amongst some of the most “improbable events” the world has ever experienced. We are experiencing exactly the kind of Black Swans the book talked of.

We asked our readers to vote for his top ten – those that resonate with some of our previous MindBullets – and those that still seem to ring true after a decade.

Here they are, in no particular sequence:

1. An idea starts to get truly interesting when you get scared of taking it to its logical conclusion.

2. When conflicted between two choices, take neither.

4. Fragility: We have been progressively separating human courage from warfare, allowing wimps with computer skills to kill people without the slightest risk to their lives.

5. To be completely cured of newspapers, spend a year reading the previous week’s newspapers.

6. Karl Marx, a visionary, figured out that you can control a slave much better by convincing him he is an employee.

7. Nobody wants to be perfectly transparent; not to others, certainly not to himself.

8. Rumors are only valuable when they are denied.

9. One of the problems with social networks is that it is getting harder and harder for others to complain about you behind your back.

10. If my detractors knew me better, they would hate me even more.

An aphorism is an original thought, spoken or written in a laconic and memorable form. The term was first used in the Aphorisms of Hippocrates, one of the earliest collections. Hippocrates includes such often invoked phrases as “Life is short, art long, opportunity fleeting, experience misleading, judgment difficult.”

The term was applied later to other sententious statements of physical science, and later still to statements of all kinds of philosophical, moral, or literary principles.

In modern usage an aphorism is generally understood to be a concise statement containing a subjective truth or observation cleverly and pithily written.

The great Bitcoin heist of 2027

The global crypto community is in an uproar this morning. Overnight a group of hackers, who go by the name...
Read more

The SIMs is not a game

We’re all living in a simulation, but it’s reality. You might suspect that life is just a Matrix-like simulation, a...
Read more

Ten years ago, William Okeke was an angry and unemployed youth in Kinshasa who survived on a measly US$2 a...
Read more
View more insights